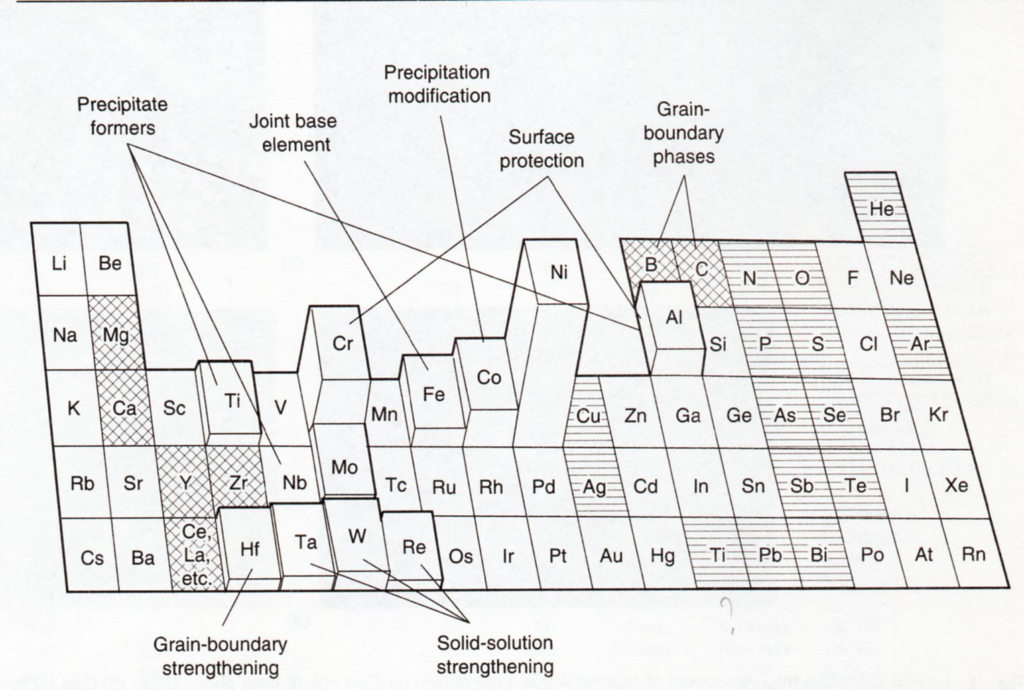 Nickel belongs to group VIII of the Transition elements together with Iron and Cobalt. It has the atomic number 28 and an atomic mass of 58,6934, representing a composite of 5 stable isotopes. In solid state, it has FCC crystallographic structure with a lattice constant of 0,35167nm at 20ºC. Nickel doesn’t show allotropic transformations in the entire ranges of temperatures up to the melting point. Its electronic configuration is Ar 3d8 4s2.

Pure nickel has 0,2% offset yield strength of 59MPa and Ultimate Tension test of 317MPa with an elongation of 30%.

Due the high solubility of many other elements, there are an important number of commercial alloys, which improves its mechanical properties by solid solution or secondary phase’s precipitation. 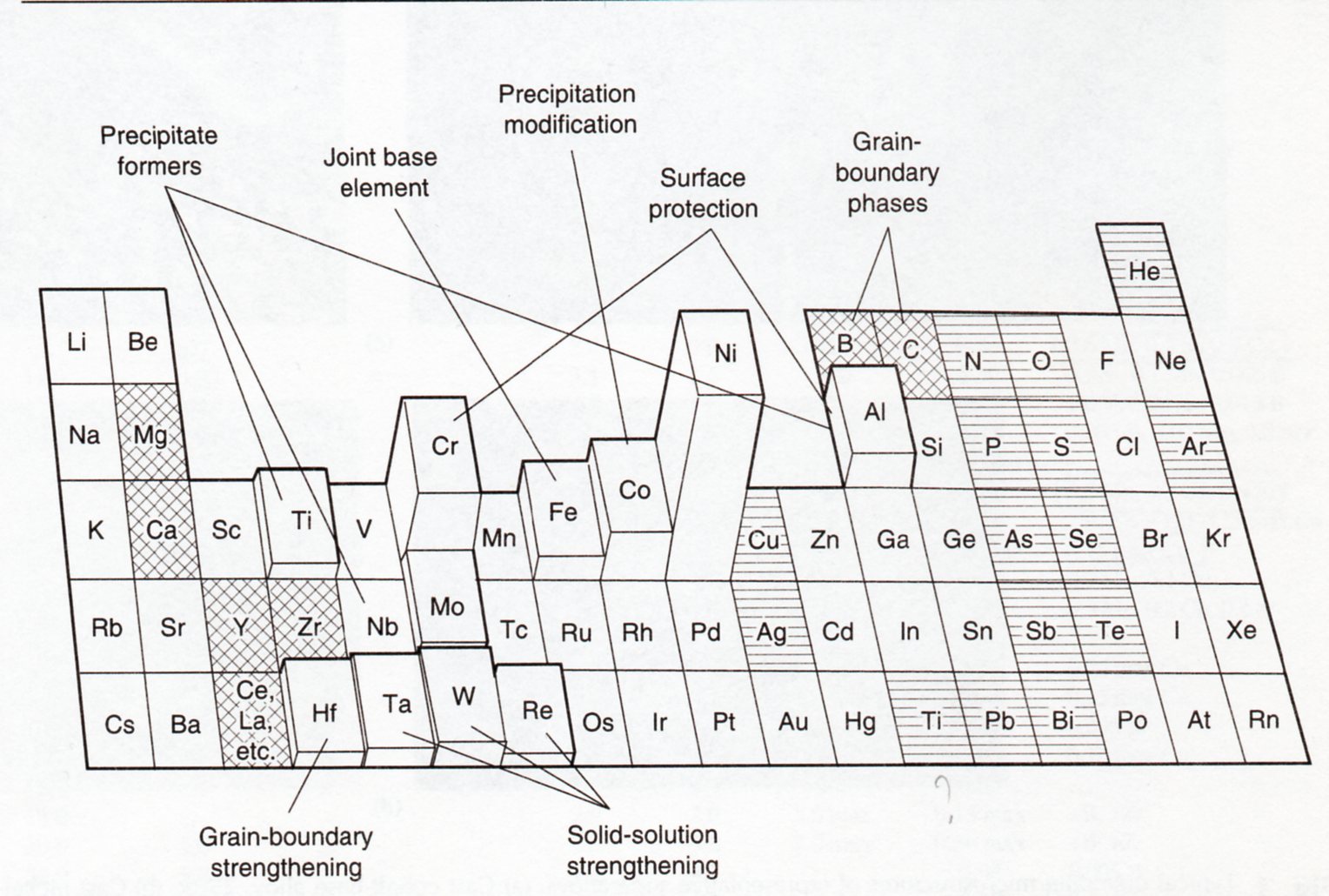 Elements like Cu, Mo, Cr, Fe, W and Co has wide solubility range in nickel and mainly are added like solution strengtheners or carbides formers. Other elements like Al, Ti, Nb, are mainly added due to its tendency to form GCP phases with huge impact on mechanical properties. Also, B, Zr, C and Hf are added due to its beneficial effect on grain boundary.

The following figure shows a schematic of some of the commercial nickel-based alloys, which have been grouped by aggregate main alloys and the hardening mechanism used to obtain the desired characteristics. 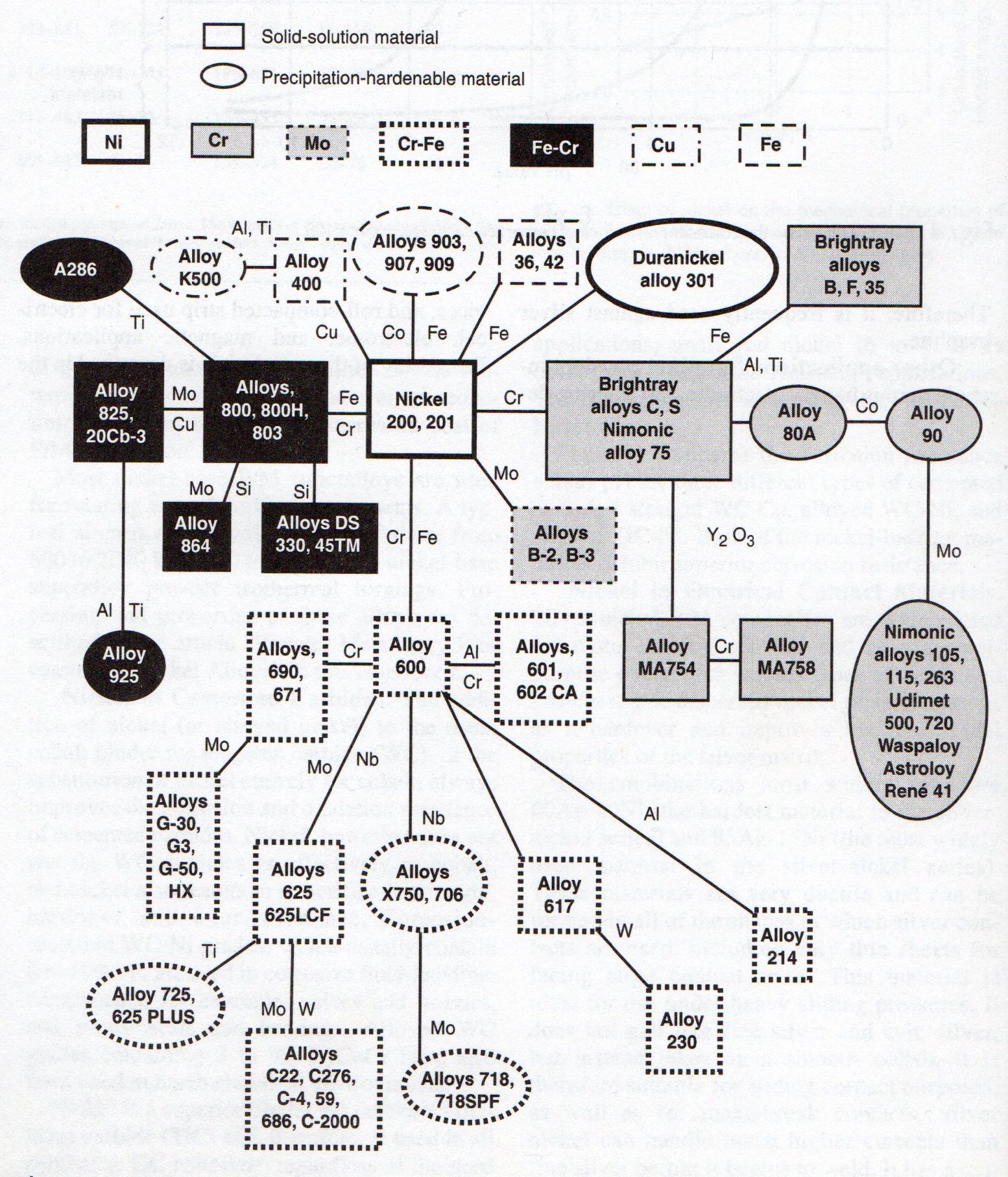 The most important uses of nickel-based alloys are: Chemical resistance in degrading environments, corrosive or radiant and High-temperature resistance. The use for cryogenic applications is marginal, although its performance is adequate.

Deposited weld metal has an austenitic, FCC, crystallographic structure that is stable since solidus temperature to room temperature. For this reason, weld metal microstructure is constituted by large grains formed by dendrites or cells. In both interdendritic and intergranular zones is where segregated alloys elements’ and other concentrated impurities can lead the formation of secondary phases as last solidification constituent. [1-11].

Hastelloy C-276 weld metal tends to form TCP phases that precipitate as last solid in both interdendritic and intergranular zones, during solidification. The most common secondary phases on this NiCrMo alloy are the called Mu phase and P phase.

The grain boundaries are those areas where the grains that grow by solidification of the liquid coincide, being the result of the competitive growth of the grains. As coincident grains have different directions and growth orientations, these grain boundaries are characterized by a high angular misorientation, also known as “High Angle” boundaries, which generates a network of dislocations.

The grain boundaries also have a compositional component, in which most of the impurities and the segregated elements are concentrated during solidification. These compositions lead the formation of low-melting point compounds

Hastalloy C-276 deposited weld metal show two different type of secondary solidification constituent, intermetallic topological close package and carbides. The first one, also known as TCP, adversely affect mechanical properties due austenitic phase depletion of key alloy elements like Mo, W, etc., and due incoherent interphase between secondary solidification constituent and matrix. Carbides in general tend to increase mechanical properties if they precipitate in grain bulk, but weaken it strength if they precipitate in grain boundary. Carbides tend to precipitate at grain boundary due to strong positive segregation of carbon [3-4]. Of course, Carbide type, shape and quantity have an important role on actual effect on weld strength.

The chemical composition of Mu, P and M6C phases are very close; This is the reason why it is not possible to identify these phases by EDX in SEM. The closeness of P and Mu phase composition is not surprising since these are adjacent phases in Fe-Ni-Mo and Ni-Cr-Mo ternaries alloy system [3-5]. Even some researchers thought that P phase is a transient phase decomposing to de the stable Mu phase [3-5].

The Mu phase kinetic of formation depends on two steps, nucleation and growth. By K. Zao [3-4] Mu phase seems to be nucleated from M6C carbides, what is supposed because both phases have an almost same crystal structure and composition.

C-276 alloy usually show only Mu and P phases as TPC secondary solidification constituent. But in our study, and due weld metal high iron pick up, presence of other intermetallic phases should not be discarded.

Mu Phase has a compositional formula like B7A6, where B is any element of Group VIII-B (Fe, Co & Ni), and A could be any element of group V-B (V, Nb & Ta) and VI-B (Cr, Mo & W). It has a wide composition range, where B varies between 42 to 56 mol%. In our alloy system Mu phase usually has this composition (Fe,Co)7(Mo,W)6, where Ni and Cr could replace any of A or B elements.

Presence of Mu phase is harmful for rupture strength, toughness, ductility and corrosion resistance, (Zhao, et al. 2005) (Handbook 2000). But precipitation of moderate amount of needle-like of Mu Phase do not affect neither tensile strength nor room temperature toughness (Zhao, et al. 2005) in accordance with Simonetti and Caron, research done on single crystal. [3-1]

There are a couple of mechanisms that explain why mechanical properties are affected by Mu Phase precipitation. First one, is due brittleness of Mu Phase, which produce interfacial decohesion and crack initiation, because it acts as a barrier to moving dislocations at interface. And second one, because the loss of some of the key solid solution strengthening elements, which are concentrated in Mu phase (Zhao, et al. 2005)

Once Mu phase secondary solidification constituent, it is difficult to be dissolved by heat treatment (Zhao, et al. 2005) (Raghavan;, Berkowitz and Scanlon 1982)

Mu phase distribution is heterogeneous and it is mainly concentrated at interdendritic area. Elements microsegregation during alloy solidification explain m phase preference location at interdedritic area, where Mu is concentrated.

Petroleum tanks used to store crude oil, aviation fuel, gasoline, diesel and other products above and below ground. Leaking tanks may create significant environmental damage and jeopardize safety. Soil and water contamination can be tremendous and be undetected for years.

Different methods have been developed and applied during the recent decades for non-destructive evaluation of metal and fiber-reinforced plastics (FRP) structures. Among these methods, acoustic emission technology is unique as it not only detects flaws but also is used for on-line, real-time monitoring of structural integrity without interruption of operation, cleaning, or product evacuation.

The oil and gas industry experienced some major challenges in 2020. With the sudden reduction in fuel consumption, there was a substantial global surplus of crude oil. This unique situation has seen storage facilities reach maximum capacity and even crude tankers being used to store unwanted product.

Retired storage facilities are being targeted for reinstatement, and operators are considering tank construction to increase capacity. With increased storage requirements and potential inspection deferrals, there is also an increased requirement to perform in-service tank inspection to assess critical components within the asset.

This article will do a complete NDT techniques revision that can be applied to the recommissioning tanks.